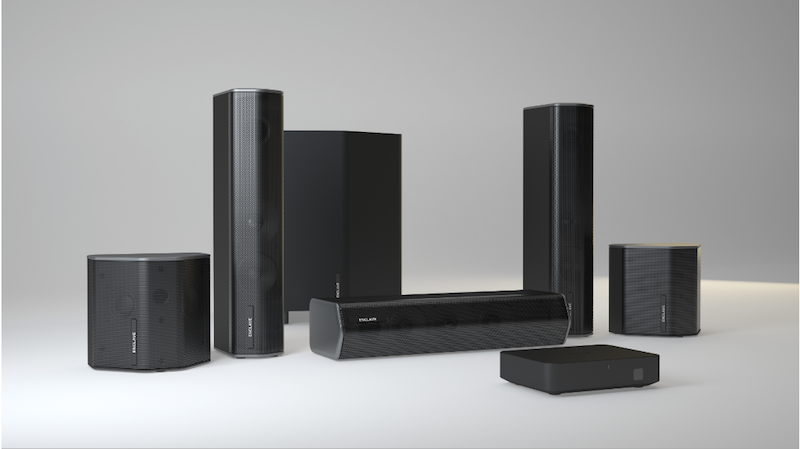 The folks at Enclave Audio sent me their CineHome II | CineHub Edition 5.1 WiSA system to check out earlier this month. This little home theater in a box product is squarely DIY with a price point around $1,000. How good could it possibly sound? I set out to see for myself.

The CineHome II | CineHub Edition ships in a plain Jane cardboard box that opens to reveal a pretty slick packaging presentation inside. Two accessory boxes lie nestled in foam atop the speakers below. Quick start instructions are printed clearly on the box, inviting the user to begin with the included user guide.

Six speakers sit labeled intuitively beneath the initial foam cocoon, correspond precisely to an included picture guide. This may be one of the best set up/unboxing experiences I’ve seen. I don’t review many DIY products, so I’m guessing this may be standard fare for this type of gear. That said, the pro channel could take a few notes here and remember that pro installers are people too and a little guidance goes a long way.

This part was pretty easy. The guide told me to place all six speakers according to the included diagram, plug them in, and turn on the CineHub once they were all powered on. I carried each one to its place, plugged in, and turned on the power.

Blue lights started flashing immediately on the back of each speaker and turned solid once the CineHub was installed. The connectivity between the system and the hub was also extremely intuitive and flexible. The CineHome II | CineHub Edition is capable of accepting incoming connections from HDMI ARC, eARC (coming soon), SPDIF, and analog mini stereo. Whether you have a TV, computer, or standalone streaming box as your source, the CineHub can take it. This is a nice departure from similar systems where they seem to assume everyone in the world now has eARC gear with a spare HDMI output.

I used SPDIF optical audio and connected my TV and the CineHub together. Once all connections were made, I downloaded the Enclave app as directed by the quick start guide. The app quickly found my system via Bluetooth, and I was able to connect seamlessly.

I felt this part could have used a little more “wizarding.” I didn’t see any options from the CineHome II to add a universal remote control or tune the room. Don’t get me wrong, I figured those out on my own, but for such a killer unboxing and initial installation to lose steam in user friendliness before the finish line was dissonant. I may not have even noticed this stark contrast had the hardware portion not been so well done.

After I’d connected the app, downloaded a firmware update, and made sure I’d cued up some content, I started watching a few demo videos to see how things sounded. First up, I watched a Dolby Surround reel using YouTube as my source and ensuring the content was multichannel. The sound immediately came alive, and I felt the true surround signal moving around me and giving that immersive effect you only get with a true 5.1 system (sorry waveguide solutions, you’re pretty good, but ain’t nothing like an actual speaker behind you when it counts).

I moved to the Top Gun: Maverick trailer and was impressed by the WiSA system delivering solid performance with no skipping or latency.

I didn’t hear killer sound from the CineHome II out of the box, so I consulted the app. There are numerous tweaks available to adjust individual speaker levels and also an idiot-proof “Whole Room Stereo” mode. I played around with each mode and found that I could achieve a pretty nice sound by adjusting the subwoofer dB gain just a bit.

Overall I liked the sound quality and the Enclave CineHome II | CineHub Edition delivers a lot for the money. At $1,099.98, I’m having a hard time understanding how they managed to make such a high-quality system at such a low price point. While I certainly don’t see it replacing any of the pro products that we offer day to day, Enclave has introduced us to a customer we don’t usually see, and that’s a great combination.

I recommend the Enclave CineHome II | CineHub Edition as a “toe in the water” for custom integrators to try their hand at catering to a DIY audience. The product itself will delight the consumer and should produce minimal support calls. Who knows what buried treasure may lay ahead for those willing to try something new?

Related: Strapping on My Toolbelt for the Savant Smart Audio WiSA Soundbar 55