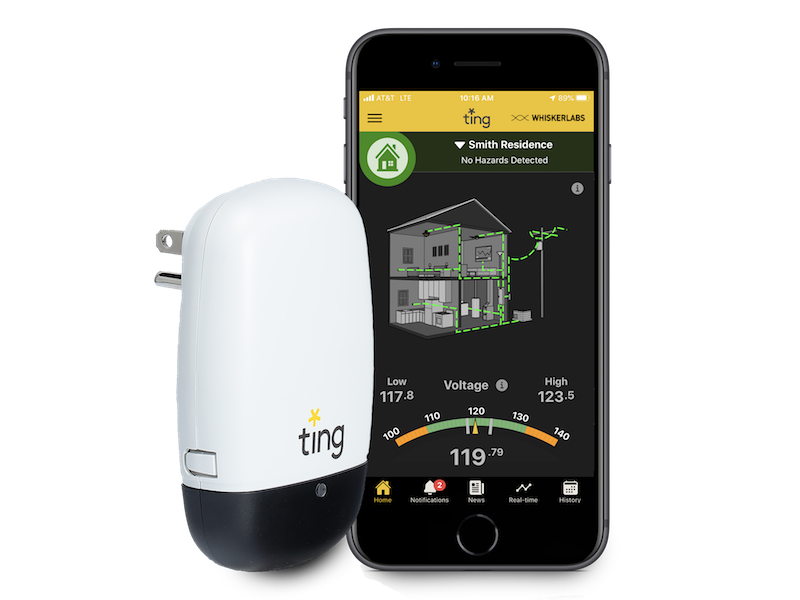 Whisker Labs, the manufacturer of the Ting Smart Electrical Sensor, has not been idle over the past year. First, they have released a second-generation Ting sensor. Like the first-generation Ting, it is installed by simply plugging the unit into an unused outlet in a home and still has the same hazard detection and fire safety functionality. However, the Gen 2 Ting sensor has been redesigned to be more sustainable. This includes making the device both smaller and lighter, requires less packaging for shipment, and uses 33% less power than the original version.

About a year ago I wrote about the original Ting Smart Electrical Sensor. I explored how it leveraged electrical sensors and machine learning algorithms that detect micro-arcing within a home’s electrical wiring and electrically powered devices installed in the home. It was designed to alert homeowners of problems before they can cause fires. Ting also detected problems in the electrical grid outside of a home, including grid arcing, loose/arcing transformer connections, failing transformers, power outages, power surges (high voltage), power brownouts (low voltage), distribution grid faults and outages, and transmission grid faults. Ting could also detect issues related to a home’s connection to the electrical grid, such as a loose neutral or hot wire at the home’s electrical meter.

You can find that original article here.

According to the National Fire Protection Association (NFPA), electrical fires occur in nearly 50,000 homes in the U.S. each year and these fires cause approximately $1.3B in damages. Given an estimate of 120 million homes in the U.S., this equates to around one fire in every 2,400 homes per year.

Breaking this data down even further, around 51% of the electrical fire hazards were in electrical devices/appliances, around 26% were in the main electrical panel, and around 16% were in a home’s wiring infrastructure.

Whisker Labs also found that over 26% of the electrical fire hazards were part of the exterior of a home. These include exterior wiring of a home (i.e. outside outlets and lighting), devices outside a home (i.e. pool pumps), and issues with the wiring/insulators where power from the grid enters the home that are the responsibility of the homeowner to maintain.  Other areas of the home with the highest incident of electrical fire hazards are a home’s living room, garage, basement, main electrical panel, and bedrooms.

Whisker Labs believes that the high number of electrical fire hazards related to smart devices (switches, laptops, etc.) is a result of cheap devices being produced overseas that are not approved by standards organizations such as U.L., Intertek, and CSA.

The company also found that ~78% of the electrical fire hazards related to a home’s infrastructure where in either a home’s wiring or electrical outlets.

For those that want to dig even deeper into the data collected by Ting, a whitepaper that covers their analysis in detail can be found here.

The Ting sensor, and the role it can play in detecting issues in the electrical grid, was recently highlighted in a report regarding the recent Costal Fire in California. According to Bloomberg, Ting Sensors being used by local residents detected a significant brownout minutes before the fire was reported. Other grid issues were also detected by the Ting sensors in the months leading up to the fire. At this point in time, the actual cause of the fire is still under investigation.

The Ting sensor, along with one year of monitoring service costs $349. After the first year, renewing the monitoring service for an additional year costs $99. However, Ting has continued to work with both insurance companies and electricity providers to make available Ting Sensors to their customers for free. Some of the companies offering Ting Sensors to their customers are State Farm and American National.

According to Reference.com the odds of someone getting hit by a car in the U.S. is one in 4,292. That makes it around twice as likely to have a fire in your home. With those odds, it makes sense to talk to your insurance company, insurance agent, etc. to see they will provide you with a Ting Sensor. Ting is always working to expand the number of insurance companies it has partnerships with. Even if you can’t get one for free, there is real value in outfitting your home with a Ting sensor.