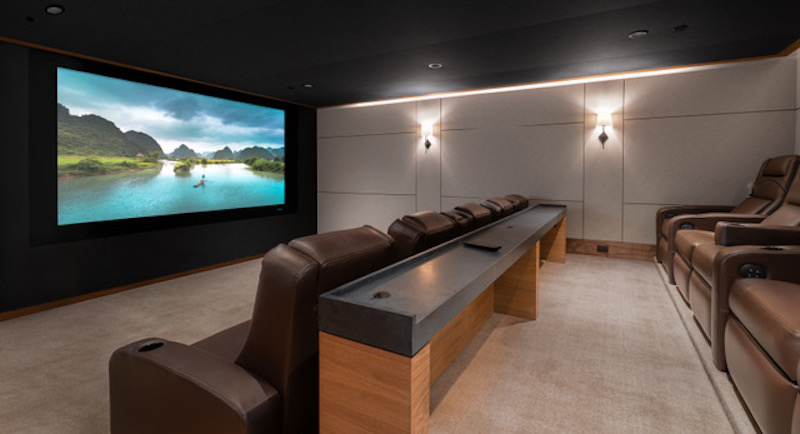 This bespoke private cinema delivers a more immersive experience than even the best commercial theaters, and the audience is filled with all your favorite people. Paradise Theater - Design and engineering, Amplified Lifestyles - Systems and integration, and Cinergy Construction - Theater construction.

A Superpower to Save the Cinema

The story opens on a daunting scene. Clearly the main character is in peril – taken captive and separated from those who would offer support. This after a series of unfortunate events have already taken their toll.

There is a potential hero, but even though possessing new superpowers, our avenger is subject to detractors from all sides, undermining and challenging his ability to provide salvation. If things don’t change, our character will be destined to a bleak fate, our hero the prospect of pondering what might have been. The future looks grim.

Is this a teaser of an upcoming blockbuster? A storyline that will be developed and produced with stunning cinematography, special effects, and profound immersive sound? Beloved characters, heroes, and reviled villains portrayed by our favorite stars?

In fact, it is a true story that is unfolding before our very eyes.

Our “damsel in distress” is “the movies” – the art form, the industry, and the theaters. The daunting scenario above is the current state of the movies. This current crisis, however, is only the proverbial last straw. To understand our unwary victim’s plight, we must employ the theatrical technique of retrospective.

The movie industry has enjoyed times of preeminence and times of relative insignificance. In 1944, 60 percent of the American population regularly went to the movies. By 1970 the percentage had dropped to less than 10 percent, due primarily to an increase in television ownership.

So, is television the villain? Ironically, while television had an undeniable impact on movie attendance, in many ways it propelled the industry to innovate. Wide screens, color technologies, advances in cinematography, stereo, surround and, ultimately, immersive sound owe much of the impetus for their implementation to the drive to separate the movie theater experience from what would be available in the home.

At this point in our story, we cannot definitively identify a villain, however our beloved main character is still under duress.

Our story flashes through decades of change. Our beloved star, the movies, sees good times and bad. Our new character – television – develops along a similarly tumultuous path. As we draw nearer to the present, we see both movies and television enjoying unimaginable success. With television, worldwide revenues climb to more than $260 billion in 2018 and theatrical box office sales grow to $42 billion in 2019. It seems like television and film could be friendly rivals. What could possibly go wrong?

Things aren’t always as they seem. Another creature had appeared and was influencing both film and television: Technology. At the same time that film was using technology, in the form of special effects, image quality, immersive sound and more, to escalate the audience expectations, technology was providing television with an ever more compelling set of attractions. With streaming, it suddenly appeared as if there were fewer reasons to leave the home to watch movies. Great films – critically acclaimed artistic works – suddenly failed at the box office. The term “theatricality” found a new definition. Award-winning critical favorites like The Green Book, Whiplash, or Booksmart were said to lack theatricality as the audience chose to stay home. It seemed that only the latest action adventure or space odyssey blockbuster would entice people to get in the car, pay for admission, and fill a cinema seat.

In fact, did the audience even want to watch movies at all? Streaming offered not only a more convenient way to see movies (albeit not as quickly), but it also offered a huge new library of alternate content. As art once again imitated life, technology, like it had done with the internet, provided the public with so many choices that our poor protagonist, the movies, became lost in a crowd.

The future of The Movies was, once again uncertain when a twist of the plot, worthy of M. Night Shyamalan, appears – COVID–19. The question of theatricality becomes moot as blockbusters, artistic nuanced films, and audiences alike are, in effect, held captive. As the crisis developed, it became clear that this was a potentially existential threat to theaters and the movies as we know them.

It is at this point that we rejoin our tale and re-enter that daunting opening scene. Up until now we’ve been reliving the past. Interesting to be sure, but there isn’t much we can do about it. From here on out, the story is yet unwritten. One ending might look like this:

“The Movies” are in peril. In the current scenario, what was once a grand and noble entity is left with the option of ceasing to exist or being reduced to something that will fit in a much smaller world – a world without commercial theaters. A world where the once riveting and compelling experience that was known as “going to the movies” has to share time and space with social media applications, reality programming, and every other distraction imaginable.

Gone is the suspension of disbelief as the “so called” audience presses pause to take a call or text.

Sure, a “would be” hero made a brief appearance. Calling himself, Home Theater, he promised to keep movies alive but ultimately compromised his own values and ended up hanging around on walls and in places a theater or movies were not really supposed to live.

Our story ends in a far distant future where the denizens cannot fathom a time that groups of people would gather in a special place to become lost in a fanciful tale for a time and share those emotions with loved ones for years. There just isn’t time for that sort of thing…

Again, things aren’t always as they seem. What had felt like the end may, in fact, be a new beginning. An alternate story line is possible.

“The Movies” are in the same perilous position. Facing the dilemma to become something less in order to survive. It is as if Film is in an arena where the spectators are shouting for blood and the only way out is to accept a soulless existence that is just a shadowy replica of the grandeur that had once been. In this version though our hero has appeared stronger. No mere home theater replica, our hero has brought all the power of the greatest theatrical experiences to the fray. Not only that, but our hero’s superpower is that it can be with every movie lover at the same time – the big screen and stunning images, the powerful immersive sound, and the power to transport every audience into the story completely. It is the movies, better than ever, at home!

Our hero is Private Cinema. In this story, “The Movies” is far too important to our hero for compromise to be acceptable. This hero admires “The Movies” for what it is, “the most complete, truly contemporary art form” (Renzo Piano, Architect of the Academy Museum of Film, Hollywood). Worthy of being preserved and allowed to flourish.

In this new beginning, our beloved main character has a new home. In fact, shares many homes. The great theaters that will remain, the great private cinemas that will be built and most importantly, in the hearts of every movie lover that is and is yet to be.