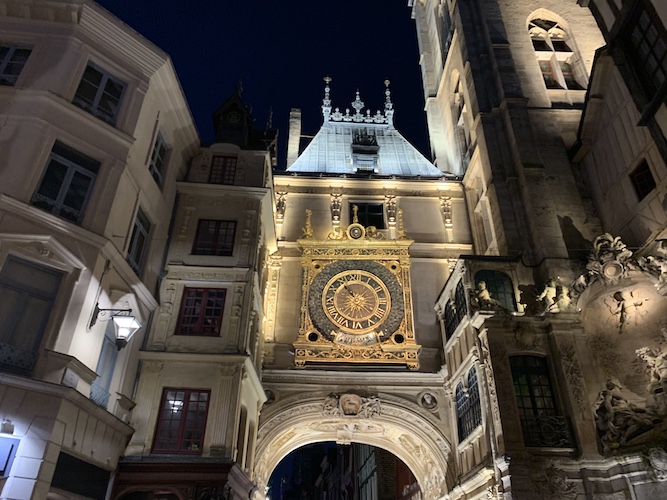 Although it’s been over five years since I’ve been there, I would still say that my favorite experience with projection mapping was at Walt Disney World’s Magic Kingdom, during the fireworks show at Cinderella’s Castle. But, Disney is not the only place to find this technology. My husband and I just returned from France, where we saw another amazing example.

Wikipedia describes projection mapping as, “Similar to video mapping and spatial augmented reality… a projection technology used to turn objects, often irregularly shaped, into a display surface for video projection. These objects may be complex industrial landscapes, such as buildings, small indoor objects or theatrical stages.”

A few years back, I was lucky enough to come across an experience at the top of the mountain in the Amalfi Coast in Italy. The story of the city was told first though projecting on the side of a castle, and then the audience was ushered over to a dark garden overlooking the ocean where artists’ stories were told through captivating content and finally on the back of a castle, which included a simulation of the castle crumbling. Together with outstanding audio, including the low end of the crumbling rocks, the experience captivated me.

Most recently I sought out the city of Rouen, a small town in the Normandy region of France where first my husband and I dined at the oldest restaurant in the country – a structure that has stood the test of time since 1345! We then ran to Rouen’s Notre Dame cathedral to find the experience had just begun. If you’ve never been to France, meals are not quick, so although we started our dinner around 8 p.m., we were hard-pressed to make the 10:30 show – hence the running.

Rouen is a stunning French town complete with cobblestone and this clock.

Thankfully we found that there were three stories told on the façade of the cathedral – a building that dates back to the 12th century, and that they were told twice, meaning that we were still able to experience them all.

This free event started back in 2015 on the theme of Impressionism. Today, the other shows’ themes are based on Joan and the Vikings, yes, we mean Joan of Arc as she is a legendary character in France, and she tells her story on this tallest cathedral in France.

“Destroyed during the Viking invasions in 841 and, partially, in 1944, by Allied bombardments, the cathedral is a living structure, perpetually evolving. Its 19th century cast iron spire rises to a height of 151 meters (the highest in France). The cathedral is also the only one in France to possess an adjoining archiepiscopal palace still occupied by an archbishop today.

The choir of the cathedral contains the tombs of the Dukes of Normandy, including that of Rollon, founder of the duchy in 911, and the heart of Richard the Lionheart, King of England and Duke of Normandy.

The ability to take a newer technology and to mold it into one of the world’s oldest buildings, to combine both past and present, was done expertly by Cosmo AV.

They transformed the saga of Joan of Arc and the Treaty of Saint-Clair-sur-Epte, which conceded Normandy to the Vikings. The countless statues were expertly highlighted, and the cut out of the building was flawless.

The content maintained a foot in reality by having octopus tentacles coming in and out of the scene via doorways and windows, and windows becoming a place for waterfalls. The detail in the content and design was not missed, and all came together to create a stunning show, both entertaining and educational for all to experience.

Have you seen a stellar projection mapping experience? Where is the world’s best and why? Tell me in the comment section below.