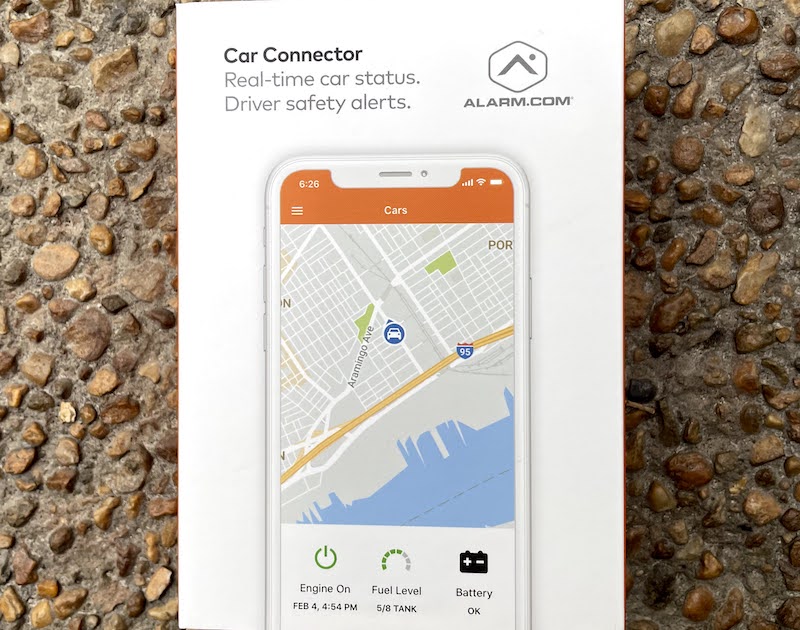 Alarm.com sent me their new Car Connector to test out in the Clifford family SUV. The sleek little box promises to monitor vehicle health, driving patterns and act as an easy locator in any “dude, where’s my car?” situations. I don’t have teenagers yet but would imagine a product like this would be a godsend for concerned parents. How well would it work in actual field conditions? I set off to find out.

Related: Hands on with Wellcam from Alarm.com 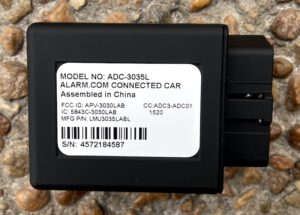 The Car Connector is very small and comes in a plain cardboard box with simple printed instructions. There’s really not much to it. It’s a black box with a connector designed to plug right into the OBD-II port (standard on vehicles manufactured after 1996 – hybrid and electric cars are not currently supported). Along the side are three indicator lights showing power and network connectivity status.

Installation of the Car Connector

I worry a little about the Car Connector needing power when the vehicle is turned off, but hopefully it’s not enough to drain the battery.

I entered in the serial number by scanning the barcode using my smartphone, which began the activation process. It took around 10 minutes where I had no idea whether things were going as planned or were failing miserably. I just sat there and waited. After what seemed like an eternity, a message popped up asking me to turn on the vehicle. I complied and then saw a “Congratulations” splash across my screen.

The Alarm.com app directed me to enable “Start Stop Technology” in the preferences and subscribe to notifications for unexpected vehicle movement and driver behavior (that one made me excited and nervous at the same time). I also turned on Geo-Services because Alarm.com allows the Car Connector to trigger features in the home like turning lights on/off or sending “left-open” reminders for the garage door when your car leaves or enters a geofence around the home. I’ve been using that for years with my smart phone, so I immediately jumped at the opportunity to tie those same capabilities to my vehicle.

With the Car Connector installation complete, I decided to go for a drive and test it out. The Car Connector shows up in the Alarm.com app alongside its other services like lighting, security and HVAC control. There’s a live view showing the vehicle’s current location along with a “Trips” tab keeping a log of all my little jaunts around Richmond, where I live.

I checked out my first trip and loved that fuel efficiency and average speed were easily accessible. The “bread crumb” map also showed all the places where I went a little too fast. As it turns out, I’ve been a naughty boy. I’m not sure I like having the Car Connector letting me know how much of a lead foot I have, but my inner hypocrite will have no issue with relishing this capability when my 14-year old starts driving in a few years.

If you’re interested in keeping an eye on the family fleet and other drivers in the home, the Car Connector is a great add-on to any Alarm.com system. The monthly subscription is nominal and the Car Connector itself doesn’t have an MSRP. My suspicion is most dealers will give them away in exchange for longer term service commitments (give away the razor, sell the blades). There are a ton of competitors out there offering smart vehicle capabilities, but Alarm.com delivers simplicity, which declutters the user experience via a single app.