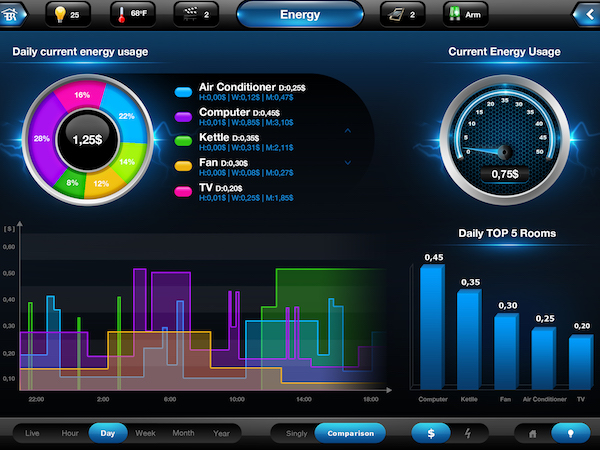 “Energy vampires” refers to electronic devices that sit in standby mode, consuming power while waiting for someone to use them. The power consumed in standby mode by a device is sometimes also referred to as “phantom power” or “always on power”.

In years past, energy vampires were a much bigger problem than they are today. The One Watt Initiative by the International Energy Agency in 1999 worked to reduce the standby power consumption by all devices to 1 watt or less. The success of the One Watt Initiative has been instrumental in significantly reducing the power consumed by people. However, according to Duke Energy, energy vampires can still account for up to 20% of your monthly energy bill.

In our home, we have a Sense Energy Monitor (you can find the article I wrote about the Sense Energy Monitor here). It reports that our “always on power” is 300 watts, and these 300 watts will cost us almost $400* per year. With that in mind, I decided to investigate whether it is possible or practical to reduce that number.

The Price of Energy

Electricity prices, like the prices of everything else, are going up and up. According to the U.S Energy Information Administration, “The U.S. residential electricity price will average 14.6 cents/kWh between June and August 2022, up 4.8% from summer 2021.” With this in mind, the question facing smart home owners is how they can save energy in their homes?

Replacing your existing appliances and devices with more energy efficient models is always an option; though this can be an expensive choice. Even with the rising price of electricity, it can take years to recoup the cost of a new appliance through the savings on your electricity bill.

The first thing I did in my effort to eliminate energy vampires in our home was to start thinking about how I could reduce our 300 watts of always-on power. The approach I came up with was:

Coming up with a list wasn’t difficult. Mine included:

After studying the above list, the first thing I did was to eliminate devices that are needed to run our home’s general infrastructure. These included our networking hardware and smart home processors/hubs. I realized that three of my smart home processors are only used for developing software drivers. Since I don’t do that every day, I could use a simple manual switch so they could be turned on, only when needed and otherwise left off. This allowed me to save 13 watts, which equates to $16.64 per year in electricity cost.

Second, I eliminated devices that had to stay on all the time, including our refrigerator and freezer.

Third, I eliminated devices that required 220 VAC power (stove/oven and clothes dryer) as switches to turn these off would be expensive and difficult to install.

Finally, I eliminated the dishwasher and microwave oven. Both of these are built into the cabinetry of our kitchen, making the installation of smart switches to turn their power on/off very difficult.

Next I started measuring the power used by the remaining devices and appliances on my list. For this I used the new Shelly Plug US that I recently wrote about (you can find that article here.) The Shelly Plug US measures the power consumed by devices plugged into it, and power readings can easily be viewed by simply using a browser to display the smart plug’s web interface. SwitchBot has recently released a smart plug that includes energy monitoring. I haven’t tried that product, but it appears that it could also serve as an energy usage measuring tool.

The good news is that the International Energy Agency’s One Watt Initiative seems to have been a major success. The vast majority of always on devices in our home consumed less than 1 watt of power while in standby mode. These included our TVs, AV receiver, laptop computers (when shutdown and in sleep mode), computer monitors, laser printer, clothes washer, air fryer oven, and paper shredder.

This left me with a very short list of devices to consider for energy savings:

Using the Shelly Plug US, I started by measuring the power usage of various Amazon Alexa devices in our home and found the following:

Next, I measured the power consumed by the cable box/DVR. With the TV off, it consumed 40 watts, which equates to $51.19* per year in electricity cost.

I spoke with Shelly, and they told me that the Shelly Plug US itself consumes 0.9 watts, which equates to $1.15* per year in electricity cost. And, according to the Shelly web site at the time that I was writing this article, the price of the Shelly Plug US is $19.25. If I used one to switch the power off on the Echo Show 10 at night, when we’re asleep, and every time our house is unoccupied, that might allow me to have the Echo Show 10 turned off 50% of the time. In that case it would take approximately four years to break even and start saving money. All the other Echo devices, which consume much less power than the Echo Show 10, would take even longer before we started saving money on our electrical bill.

There are less expensive smart plugs than the Shelly Plug US, that don’t include energy monitoring. I could use one of these instead and shorten the payback time on the investment. However, as was mentioned in my recent article on the Ting Electricity Sensor (you can find that article here) I noted that Ting has found a high number of electrical fire hazards in homes related to smart devices. They believe that this is due to the large number of inexpensive devices produced overseas that are not approved by standards organizations such as U.L., Intertek, and CSA.

My next point of attack was the cable box/DVR. A cable TV box/DVR has to be left on all the time to record TV shows on the box’s internal hard drive whenever a show tagged for recording airs. So, the only way to save money on our electrical bill is to cut the cord and hand the box back to our cable TV provider. I had done this once before, a number of years ago. At that time I ended up not being happy with the available streaming services and reluctantly went back to cable. Things have changed considerably since that time, so the energy savings and wealth of streaming choices have tipped the balance in the favor of streaming again. So, I returned the cable TV box to my cable provider, removed the data cap on my internet usage, and signed up for a selection of streaming services.

Finally, the FireTV Cube, again, uses so little electricity when not in use that there isn’t a financial payback for investing in a smart plug to switch off power to it when we’re asleep or the house isn’t occupied.

I started the work on this article thinking that I was going to save a great deal of money on our monthly electrical bill by turning off power to many of the “always on” devices in our home when we’re either asleep or away from home. However, the International Energy Agency’s One Watt Initiative has had such a positive impact that most of the appliances and other devices in our home consume so little electricity when in standby mode that there isn’t a payback for switching them off using a smart plug.

Even though I found that most of the devices in my home don’t use enough standby power to make it cost effective to switch them on/off with a smart plug, I still found ways to save 48 watts of my always-on power, which equates to $61.43* per year in electricity cost.

However, as the saying goes, “Your mileage may vary.” If you have some older devices or appliances in your home, you may find that they consume a significant amount of power and that you would benefit a great deal by switching off their power when they aren’t needed. Energy monitoring smart plugs, like the Shelly Plug US or SwitchBot Plug Mini with energy monitoring, are inexpensive testing tools for measuring the power used by appliances and devices in your home.